RTTOV (Radiative Transfer for TOVS) is a very fast radiative transfer model for passive visible, infrared and microwave downward-viewing satellite radiometers, spectrometers and interferometers. It is a FORTRAN 90 code for simulating satellite radiances, designed to be incorporated within user applications. The following paper gives an overview of the model and should be used when citing RTTOV:

Given an atmospheric profile of temperature, water vapour and, optionally, trace gases, aerosols and hydrometeors, together with surface parameters and a viewing geometry, RTTOV computes the top of atmosphere radiances in each of the channels of the sensor being simulated.

The core of RTTOV is a fast parameterisation of layer optical depths due to gas absorption which is described in the RTTOV v7 Science and Validation Report. In addition, RTTOV also optionally computes the Jacobian matrix which describes the change in radiance for a change in any element of the state vector assuming a linear relationship about a given atmospheric state. For a brief mathematical overview of radiative transfer modelling see this page. 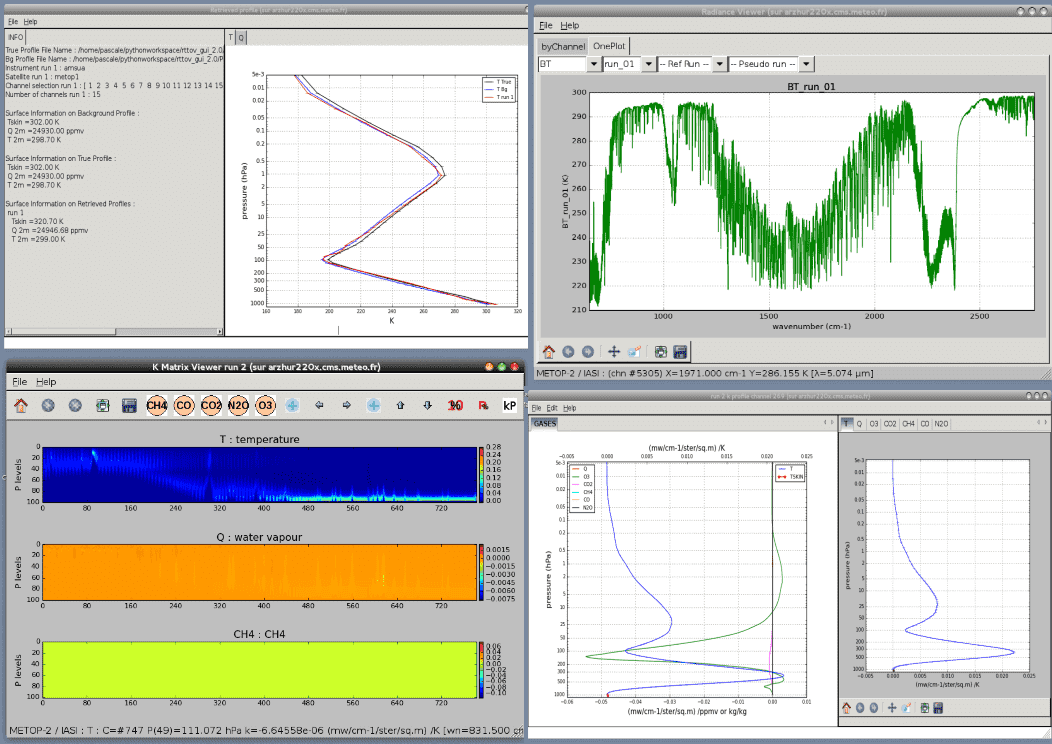 More recent versions of the software have extended its capabilities in numerous ways. Since version 11, RTTOV has had a built-in GUI which allows the user to modify an atmospheric/surface profile, run RTTOV for a given instrument, produce radiances and brightness temperatures and display instantaneously the results. It is also possible to calculate Jacobians, run PC-RTTOV and perform a basic 1DVar retrieval. All this functionality is demonstrated in the EUMETSAT/ECMWF NWP SAF Satellite Data Assimilation course.

RTTOV is available to licensed users free of charge. To become a licensed user of RTTOV, please register with the NWP SAF (or login if you have already done so) and add RTTOV to your list of software preferences. Older versions of RTTOV are available to download to maintain compatibility with certain software but are not supported by the NWP SAF.

It is recommended (though not mandatory) to compile RTTOV against the HDF5 library (v1.8.8 or later required). This enables the use of HDF5 format coefficient files (the preferred format for hyperspectral sounders), the land surface emissivity and BRDF atlases, and the RTTOV GUI.

In order to compile the RTTOV GUI or to call RTTOV from Python scripts you must also have f2py (part of NumPy) installed. Only Python3 is supported.

The GUI has additional requirements which are given in the GUI user guide.

In order to run the HTFRTC fast radiative transfer model through RTTOV you may optionally compile RTTOV against the NetCDF v4 library to use the smaller, faster netCDF coefficients files, but you can instead use the ASCII files.

Resources (coefficients, atlases, etc.) compatible with RTTOV v13 can be accessed from the downloads page.

Details of future development planned for RTTOV can be found on the Future Plans page. Users wishing to make suggestions for new features should contact the Helpdesk.

By continuing to use the site, you agree to the use of cookies. More information